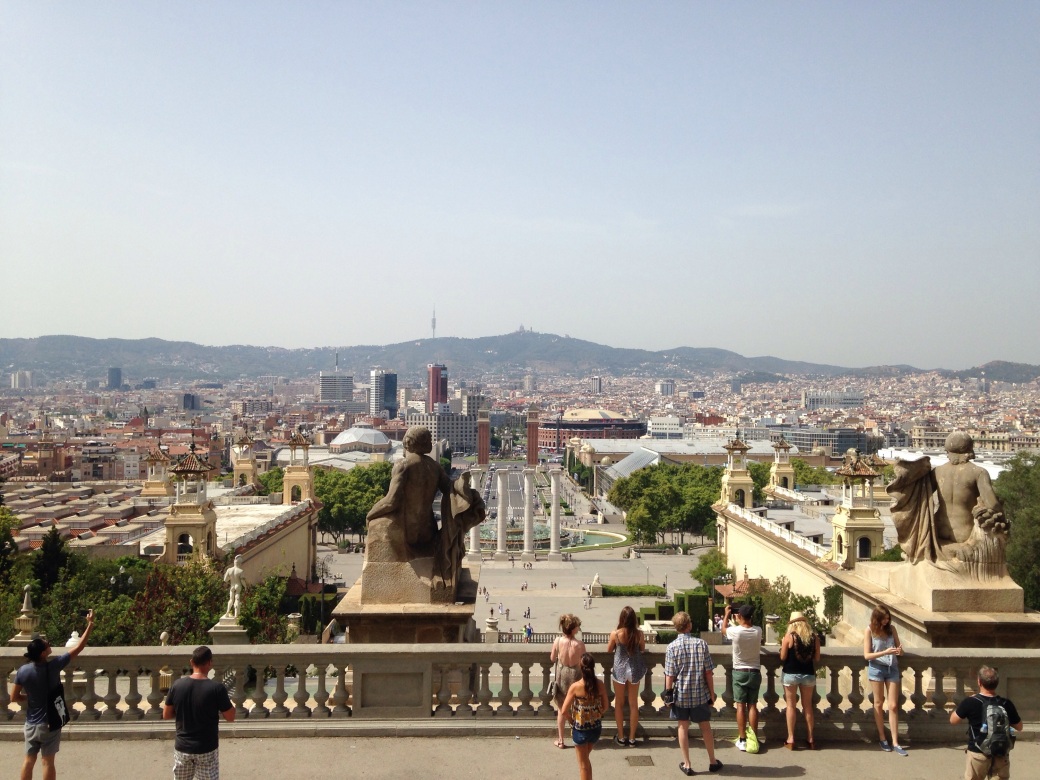 I’m typing on my phone, so pardon the typos. Or don’t. I don’t care.

I’m at a cafe near El Raval, the formerly sketchy neighborhood that’s quickly transformed into a fairly hip place (sound familiar?) There are still prostitutes and addicts and whatnot, but there are also tattoo shops and hip clothing shops and bars and lots of tourists.

For my second and third nights in town, I stayed in a hostel near La Rambla, one of the main streets that’s generally filled TO THE BRIM with tourists who put these obnoxious whistle things in their mouths and walk around blowing into them.

At 4 am on the second night, while convered in sweat from sprinting down La Rambla for the SECOND time in a month, I met a Swedish 22-year-old named Petter who worked the night shift at the hostel. Okay, I was not only covered in sweat — I was also recovering from a particularly degrading few hours. I was supposed to meet a Catalan man I met at a restaurant last time I was here at the beach, but I couldn’t find him. I asked a Frenchman (who told me he was gay and then said he had been lying 15 minutes later) to use his phone. Didn’t work. I sat next to the Frenchman and his friends for a few hours. Two of his friends made humping motions at me. I told them it was a gross way to pick up women.

In any other situation, I would have ditched the French boys, but I had already paid 10 euros for a cab and was far from the hostel.

Meanwhile, a boy with brown teeth, a pudgy stomach, and a shitty weed leaf back tattoo plopped down next to me and asked me if I did heroin.

I turned my back to him and he proceeded to do some dance moves on the beach while staring at women who sunbathed nearby, then rolled in the sand and rubbed it into his belly, staring at me. I’m fairly certain he was tripping.

Fast forward a bit and I’ll introduce you to the worst human I’ve ever had the displeasure of meeting. He stormed over to where we were sitting, announced that he was from New York, then started screaming at a drunk for kicking him in the chest the day before.

“I COUGH EVERYTIME I BREATHE. FUCKING FRENCH PEOPLE, FUCK YOU.”

I soon understood why he was kicked in the chest. It took all the strength I could muster to not do the same.

When he found out I was from the states, he told me he was actually from Portland, Maine and that he’d dropped out of school to travel. He asked me for a Euro for a sandwich. I gave it to him. He came back with bread.

“How long are you staying here?”

“I’m trying to get the fuck out of here. I’ve been living on the beach and it fucking sucks. I’m supposed to catch a ride to France, but I’m pretty sure the dude I’m riding with is gonna be smoking crack the whole time.”

“Hmm, you might not want to ride with him. You probably shouldn’t smoke crack…”

He then started ranting about being from New York.

“You just told me you were from Portland.”

“I’m a fucking New Yorker. Have you heard of Queens? Me and my friends lived on fucking house boats in Queens. Don’t tell me where I’m from.”

“Why are you being so aggressive right now? You’re screaming at me.”

“BECAUSE IM A RICH SHELTERED WHITE BOY AND IVE BEEN LIVING ON THE FUCKING BEACH FOR A WEEK. OF COURSE IM ANGRY.”

This is a true story. A human actually muttered these words.

Anyhow, this all ended with me asking him to please stop talking me, him telling me to get the fuck out of his “home,” and me gladly complying.

The French dudes did not step in at any point during this conversation.

There’s way more to this, but my thumbs are tired.

Needless to say, chatting with Petter came as a huge relief. The next day, we walked to a secretish garden with a theater and caught a view from an art museum with waterfalls and he offered me a place to stay. He’s chill. He looks like a Viking. His hospitality meant that I got to sleep for 12 hours last night. It’s been really nice.

I can’t type anymore. Mom, don’t worry about me. I’m safe. I don’t trust oogles or scum fucks and never will, I promise.