But that’s not true. I am the captain of this ship. Storm clouds may bring me off course but, ultimately, mine are the hands that grasp the wheel. I have been a selfish captain. I’ve thought only about my space in the ship — about the things I can see straight ahead of me. I haven’t thought about my passengers, about my heart and hands and arms and feet. The captain hears the rest of me drowning, she hears the pleas and the sputters, but she wasn’t trained to see the ship as a cohesive unit.

Of course, this doesn’t only apply to me. I am so focused on alleviating my pain with immediacy, with avoiding only the biggest and closest icebergs, that I forget to pay attention to other warnings — to overhead storm clouds, to leaks in the ships. When the time comes and the people start drowning, it’s too late.

I am sorry to the beautiful German boy whose love I felt so deeply that it scared me. I am sorry I pushed you away when things got vulnerable. I am sorry to everyone I have hurt due to hormones and impulsivity and terror. I’m sorry I sat in the lifeboat alone.

Living with my “mental illness” is basically like living with an infant, but the infant is inside me and I can’t hire a babysitter when I need a break. I can’t send my infant to school. I can’t pass my infant off to my husband or mother. No, this fucking infant is with me 24/7, throwing tantrums and creating general chaos. The problem is that I not only try to hire babysitters when it’s an impossibility — I also try to drown my infant. I force feed my infant. I blow smoke in my infant’s face. I am a single mother, dragging my infant from bed to bed, bouncing from new potential father to new potential father. Unfortunately, single, stable men rarely want to take in women with infants. We’re too complicated, too much work.

And that’s fine. This is my child. They could never love her like I can. The problem is that I’ve been doing a REALLY REALLY bad job with that, which is why the child is throwing more fits and dragging me down further. I’m ignoring the soft pleas, so she gets louder and angrier and more destructive until she’s sure I’m listening.

This is hardly a metaphor.

Yesterday, my infant threw a tantrum in the middle of the park, surrounded by new friends. I felt my arms and legs going numb, my mind sprinting down the, “oh my god I am so fucking lonely and I can’t do this. I need to go home and see Elsa and my brothers and be hugged, etc. I don’t speak Italian. I don’t know what’s happening. They don’t like me. They think I’m crazy. I am crazy. I am worthless. I am alone.” I watched parents admire their children. I watched couples twirl each other’s curls. I was so, insanely jealous.

But just as you wouldn’t subject your friends to your child’s screaming fit, I decided not to subject mine to a slew of irrational thoughts and catastrophic thinking. So I took my child for a two hour walk. I surrounded her with tourists to make her feel safe and connected. I showed her the city from high on a hill. I took her to a church and prayed to someone. I told her she was okay, that she can make it, that when things are hard, it means she’s growing. And I saw her so clearly. I saw how badly I’ve hurt her, how abandoned and afraid she feels. She eventually calmed down. I brought her home.

Here’s another truth: part of the reason my inner infant came out is because I was feeling pushed away and misunderstood. My ego was crushed.

I wrote this to Elsa in regards to what happened:

“Man, I also am learning a lot about my interactions with dudes. Like, as last night went on, I kept wanting to experience some form of intimacy with Tofu. I wanted to hold hands. I wanted to lie next to him. I wanted to touch his arm. I wanted that connection — to feel that someone was deeply interested in knowing me. I patted the bed for him to sit next to me, so I could feel the warmth of a leg touching mine, but he stayed in his chair. I hid in his mosquito net. I laid down and looked at the shadows playing on the ceiling.

I want someone to be interested in the scars on my body. I want them to ask what my tattoos mean, even the stupid ones. I want them to want to know my secrets. And I want to know theirs. I want to ask about their stupid tattoos. I want to ask about that trip they took to that faraway country. I want to know about past lovers, what happened, what they loved about each other. And somehow, sex is what ties that together. Like, I don’t know how to be intimate without it. I don’t know how to say, ‘look I want to experience all these things with you, but that doesn’t mean I want you to fuck me. Can’t we just lie in bed and look at the way the shadow plays on the ceiling when we’re both really high? Can’t we just appreciate the feeling of an arm against an arm? Of the reassurance that we’re not alone in the world?’

But that’s never how it works. And it goes both ways. That platonic intimacy soon turns into sex, just because I operate on auto-pilot so often and I think I only trust love when it’s solidified with the act of sex, forgetting over and over again that many people will have sex with anything that moves. That it’s not the real, end form of love. It can be empty and meaningless. It’s a lot more intimate to watch the shadow play on the ceiling and fall asleep with arms around each other, clothes still on. Sex can be so primal and distant.

But how would I ever say this to someone? Especially a stranger? The answer is that I wouldn’t because it’s childish and seems needy and weak. And I probably need to learn how to wrap my own arms around myself.

I must must must learn to validate myself, but I can’t expect overnight change. I will probably turn to men for that form of connection again. I did that last night. I wanted brief reassurance. Fortunately, I made it a few days relying on my own inner resources before it happened. Hopefully that period of time will increase with each experience. Hopefully I will do fewer and fewer stupid things during the course of my trip. Hopefully I will learn to fully rely on inner resources instead of other people.

To my dear friends in Minneapolis mourning the death of Ben: my heart is heavy and full of love for you. His passing is a devastating reminder of how many of us are suffering, often in silence. If you’re in pain, talk about it. Share it. Let it out like a deep exhale. Reach out to your friends. They fucking love you, even when your brain tells you otherwise.

I need these reminders, too. Do you?

Big virtual hugs to everyone. 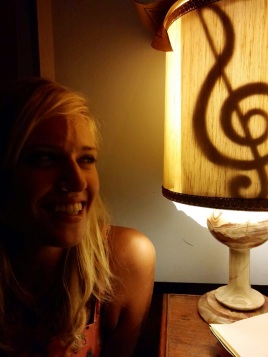 Here’s the original Florence post. It summarizes what happened in Corsica and my first few days in Florence:

Ciaoooo. I’m sitting in a bed that doesn’t belong to me because the person it belongs to is out of town, which means FULL SIZE BED FOR THREE NIIIIIIGHTS. Depending on who I’m with, strange and unfamiliar places can quickly start to feel like home. And I’m staying with a cool anarchist dude. He’s vegan, so we’ll call him Tofu. Tofu is the first “radical” person I’ve met in Europe and hanging out with him feels very natural. I don’t have to pretend to be someone else. I don’t have to hide the crazy. I do have to hide the meat-eating though. I do that outside the house. Yesterday, I ate a salami sandwich the size of my head, courtesy of two Italians that I met on my first night. I bit into a peppercorn the wrong way and cried into my sandwich.

Another day has passed. I’m curled up in a chair in Tofu’s living room. His roommate came home this morning and his friend stayed over last night. While Tofu was in the shower last night, I talked to his friend about something-something-United States and he smiled and nodded, finally concluding with:

“I need to improve my English.”

I taught Tofu the difference between liquor and liqueur, which was an appropriate segue into drinking an excessively strong coffee liqueur right before going to bed. For my first day-and-a-half here, Tofu used the term “super alcohol” for liquor and I had no idea what he was talking about.

Florence has been lovely. I needed a few days to chill after what happened in Corsica. After taking some time to reflect, I realized that the experience was toxic for me, not just because of things that I did wrong. But I put all the blame on myself because that seemed easier than confrontation.

WWOOFers are expected to work four hours a day. It’s in the guidebook. We, however, were working between 10 and 12 hours per day. And we weren’t doing farm work — we were mostly doing the dishes. We were given a few days off and permission to take more time off if needed, but when I tried that, the owner told a co-workers that she felt I was using them for food and a place to stay. I could tell that they were upset with me for leaving early, but the long work days combined with the interpersonal drama was, clearly, emotionally taxing for me.

On my last day at the farm, I packed and headed to the kitchen around 6 a.m. I left some lights on. The male owner came into the bar before giving me a ride and snapped: “Why are all these fucking lights on? What the fuck is wrong with you?” or something along those lines. Then, when it was time to get in the car, I said I wanted to sit next to my friend, who I hadn’t gotten a chance to spend time with the night before. At that point, I was also afraid to sit next to the owner. When I told him this, he said: “Are you kidding me? I’m not your fucking driver.”

And that’s how my Corsica experience ended.

But hindsight is 20/20. I am safe and content and in the process of forgiving myself for what happened. Hopefully the folks at the Potager will hire some workers instead of relying on unpaid labor. It sucks to say that because they’re generally lovely people, but it’s true. And, frankly, I would keep this to myself if the trip hadn’t ended with being cussed at and talked about behind my back, but it was a painful departure that I had to sit with for days before letting go.

All of that said, I am so fucking grateful to have met some of the most amazing women I’ve met in my life while at the Potager. Lots of love to my Quebecois, English, and Austrian lady friends. Y’all enriched my soul over and over again.

I’m trying to love myself a bit more everyday. I’m trying to let little Emily emerge from the closet. The layers of shame are thick, but I’m still chiseling away at them.

One thought on “Florence: Captain Leif Goes Back to Boat School”