I found myself again on the wooded path by my house with the fenced in elk you can see but can’t feed. I met a skinny tree with twisted veins and I said to it, “We are alive together, breathing easy in the summer and almost dying, but not quite, in the winter and, tree, I am grateful to know you.” I saw bodies in the ferns. I saw blankets in the moss. I felt the presence of those whose footsteps hardened the path before me, some of whom are dead now.

I felt my place in time. I felt the reality of the strange circumstances that gave me life, torn between resentment and gratitude for them. Why give me life if I’m bound to die? A light widened its arms around the expanse before me.

The awareness didn’t last. It couldn’t last. I plugged myself in again, headphones muting the bird songs, music drowning the voices in my head and transporting me to grungy basements, midnight bars, and living room mosh pits — places where me and my peers attempt to stop time by racing through the days, oblivious to their passing.

I have been trying to outrun death by sprinting towards it.

This is why I drink and fuck and drug myself. I don’t want to feel the rawness of life. To feel life in its purest form requires the acknowledgment that life ends. The trees will outlive me. New feet will harden the path — new feet attached to new heads with headphoned ears and racing, never-present brains. My legacy will be a forgotten contribution of my own footsteps on that path.

But maybe in a hundred years, another lost boy in a blue hoodie will find herself in those woods, in this same alien suburb, and maybe she’ll talk to the skinny tree and watch as arms widen around the ferns with the sunlight spotlights and see my body.

I was in Minneapolis this weekend. I saw my old friends facing their raw lives without the numbing powers of substances to alleviate the sting of mental illness, dwindling health, and financial desperation. We cried together. We didn’t race to the bar or smoke through an eighth or put white shit in our noses. We talked about it. We hugged each other. We ate some cheesecake and fell asleep sober.

My best friend has faced raw life for five years. I know some old-timers who have done it for decades. I’m back to thirty days. Have I been cowardly this year? Probably. Was my cowardice justified? I don’t know.

I do know is that addiction manufactures life-threatening paradoxes. Despite the reckless behavior that suggests otherwise, I don’t want to die yet.

This is my third attempt at sobriety. The first time around, I got sober as a consequence of the four-day house party I threw at my parent’s place. The second time, I got sober because Zach staged and impromptu intervention and threatened to disown me.

Today, I am sober because I want to be. The illusions are gone. I have never been able to moderate my drinking or drug use and probably never will be. Even if the obsession is miraculously lifted from me someday, what’s the fucking point in testing it? Do I really want to spend another year in physical and mental hell? Do I want to risk dying in my 20s?

Keeping myself afloat over the past 30 days has required surrendering to some major paradigm shifts. As much as I cherish my anti-authoritarian upbringing, I can’t afford to rebel anymore. Both of my relapses have resulted from what I’m going to call punk rock ideologies. My truths won’t apply to everyone — I know punk rock and anarchism have been and continue to be life savers for many of my friends — but the mentality that once freed me has been the greatest obstacle in my recovery.

WARNING: I’m about to say some heretical shit.

I have always been prone to extremism. It never mattered what it was. What mattered was that I could make a lifestyle out of it, that I did it ALL the way, that I was right, that I had found the truth, and that I could use said truth to cut myself off from the rest of the world. An extreme conviction is a safety net. It limits your friend group, which limits your exposure to outside perspectives, which means you never have to question yourself or your beliefs. It’s a tonic for fear.

And Lord, I was fucking SCARED. I was afraid of myself and my thoughts and feelings and the deep, deep hurt that I refused to acknowledge. If I could just find the right dogma with the right group of people, my existential questions would be answered with an almighty, universal truth. My pain would be remedied with a set of fundamental rules. If I obeyed the rules and vomited the philosophies, I would be fine. Tooooootally fine.

My pattern is this: I give myself over to recovery programs. I admit powerlessness and do what I’m told. I find a higher power to believe in. But when the high of the first few months wears off and my traumas emerge, my furious, anti-authoritarian self kicks in. I use anarchism and punk rock principles to justify my indigence. This is fucked up religious bullshit. You’re just another oppressor. This is a hierarchical system. I start back-talking. I resist being told what to do by other addicts and alcoholics. I convince myself that 12-step programs are shame-based cults born from Christianity. And okay, there’s some truth in that, but it’s also true that 12-step programs have saved more lives than any other method. And it’s true that my choice to rebel and ultimately relapse only brings me closer to death.

The punk rock “Fuck God/Fuck non-punks/Fuck the system/Let’s get fucked up cuz the world is shit” mentality is killing me.

Kleptomania will not end capitalism. Shitting on religion and spirituality won’t create an army of atheists. Blacking out at a punk show is not revolutionary.

I read an interview with the lead singer of FIDLAR the other day. I’ve been listening to them obsessively since I got sober and, at first, didn’t know why. Their first album revolves around the aforementioned punk rock mantra that I’m trying to separate myself from. And then I listened to their second album and it clicked. Dude is an addict. He’s speaking my language. And he’s dealt with the same resistance to sobriety as a lot of us have:

But he’s accumulated some sober time in the past couple of years and in the interview I just ranted away from, he says, “Every day it’s a little less pain . . . I’ll wake up in the morning, and I’ll still say, ‘I hate myself, and I want to die,’ but I’m learning how to deal with it. If we do it right, we will not succumb to fucking punk rock bullshit, and the possibilities are endless. As long as I keep sober and don’t kill myself, we have a long time to go.”

Of course, this doesn’t encapsulate all of punk rock or anarchism, but in the scenes I’ve been around, excessive drug and alcohol use have been normalized. I don’t know of many, if any, safe spaces or resources for recovering addicts. Seriously, I haven’t been to a sober punk show since I played at my friend’s parents’ house as a teenager. 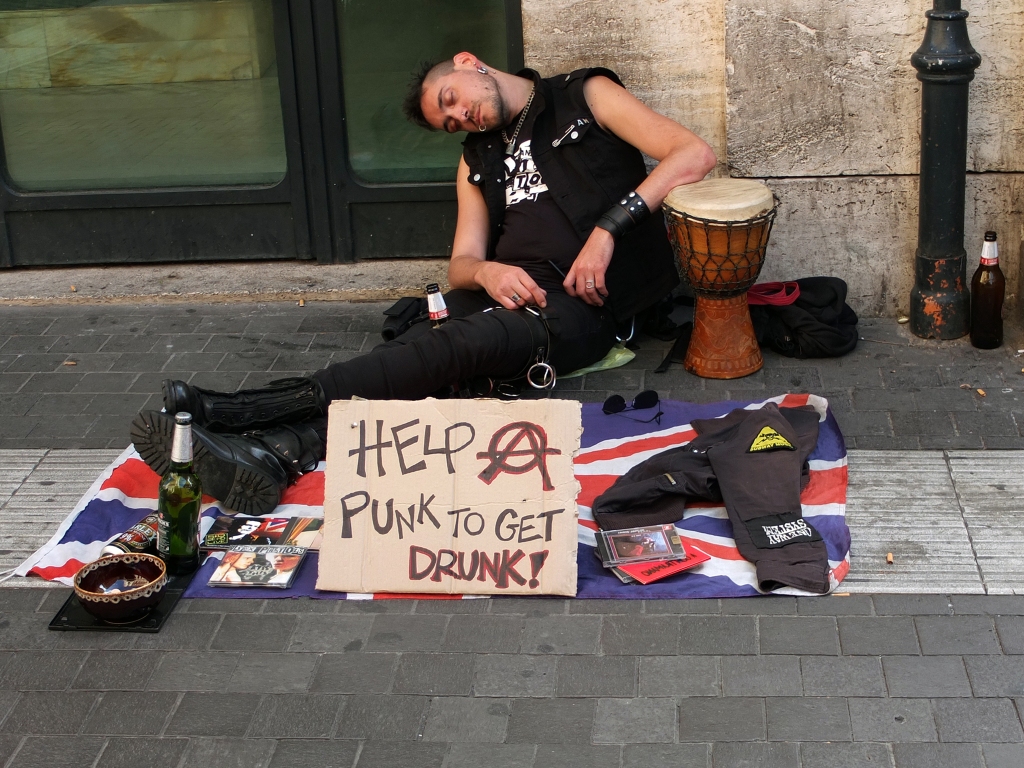 This is a problem. How are you gonna start a riot when you’re too hungover to get out of bed? How do you expect to be taken seriously when your friends are falling over drunk in the black block? How the fuck are a bunch of using addicts and alcoholics going to propose and implement a better alternative to the current system?

A sad number of kids, myself included, use the subculture to justify inaction, self-destruction, addiction, and the bad breed of nihilism. It’s kind of gross.

If we can’t take care of ourselves and the people around us, the punk rock/anarchist utopia we blab about will forever remain a lofty dream.

I’m not trying to convince anyone of anything. If this resonates with you, awesome. If not, awesome. I’m talking about some fairly specific factions within the overall scene. And I’m talking more about punk than anarchism, cuz lord knows Zerzan and Zizek aren’t barfing in dumpsters behind hardcore shows. But unfortunately, a lot of these factions tend to blend together.

I have to purge myself of this shit. I can’t afford to risk my life for the sake of sending a message to people who have cotton in their ears. I will never do anything remotely revolutionary as a using addict. The most revolutionary act for me right now is to get honest, stay sober, and eventually use the knowledge and strength recovery grants me to help other people.

Perhaps someday we’ll rethink how we can help our “mentally ill” and addicted friends. For now, I’m keeping my distance.

My life these days is quiet. This may come as a shocker, but my sober (read: authentic) self is an introvert, so I spend most days alone. I’ve realized that my manic episodes are generally drug and alcohol-induced reactions to being overstimulated in big groups of people. My nervous system is finally chilling out. I hit meetings every day, go to therapy twice a week, and am starting to make some sober friends.

Love y’all. See you in a month or so.

“Five years ago, I was broken enough to just shut the fuck up. I got sober by going to rehab, not arguing so much for once. Punk rockers ask how I did it, hoping for an easier way. And would you, and would you believe that they don’t like what I have to say. I pray as much as an atheist can and then I walk home.”